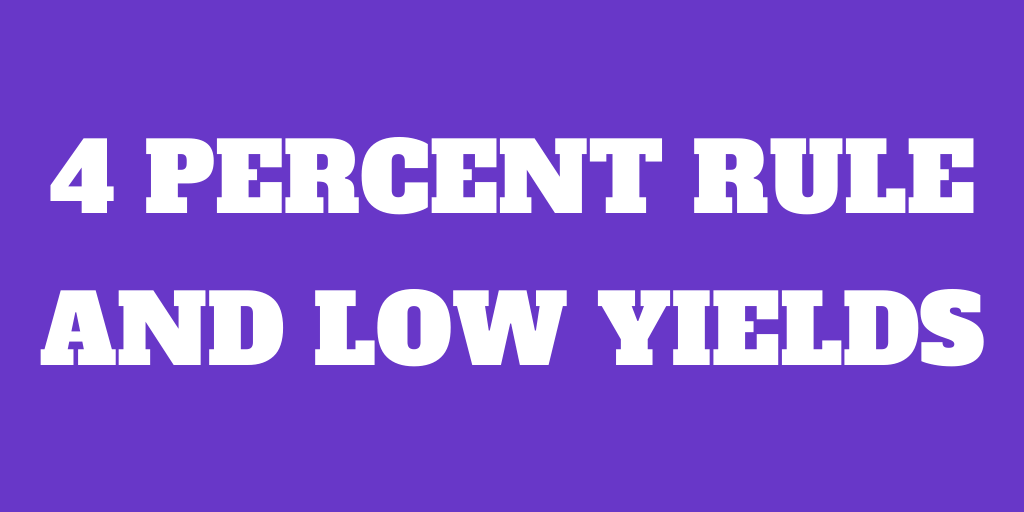 Many people are using bonds in their portfolio to make it less volatile. And many people are basing their retirement on the 4% rule. But bond yields have never been so low. So how does the 4% rule work when yields are lower?

I am going to try to answer this question in this post. I am going to simulate the chances of success with the 4% rule with different bond returns. The idea is to lower the historical interest rate to see what would have happened.

This is only a simulation of course. But given that the recent average bond returns are much lower than historical returns, it is interesting.

This is something that many people suggested. If you have bonds in your portfolio, this is an interesting question.

First, are bond yields really so low these days? We know they are low. But compared to the historical average, is it really that bad?

For reference, here are the historical yields of United States 10-Year Treasury Bonds:

That is not to say that the rates will not go lower or that they will not go back to a higher point. But it is important to note that current yields are much lower than the average historical yield.

In historical simulations of retirement withdrawals, the rates are much higher than the current rates. So it is a good concern to have about what would have happened if the rates were lower.

By now, most people should be familiar with the 4% Rule from The Trinity Study.

I have recently published updated results for the Trinity Study. These new results take more recent data into account. And I also tested for more than 30 years of retirement.

For this, I have gathered historical data about the stock market. And I have written a program to simulate the success rate of a withdrawal rate based on the historical data.

I am going to use yearly rebalancing in all my scenarios. I have already evaluated different rebalancing methods in retirement if you are interested in more details.

For reference, here are the results with the historical yields:

These results are the standard success rates that we are used to for basic withdrawal rates. Since there is a 25% chance to fail for more than 5%, I will remove this from the future graphs. Withdrawal rates between 3% and 5% are the most reasonable.

There are already a few things we can learn from this graph:

Obviously, if we change the yields, the portfolio with 100% stocks will not change at all. But it remains a good indicator of the maximum returns. And it is also the highest chance of success.

In this scenario, the average yields would be about 4%. It is still significantly higher than the rates of the last decade.

Here is what would happen in that scenario:

Let’s see what happens if yields fall by 20%. In this scenario, the average yields would be about 3.6%. It is still higher than the yields of the last decade.

Here is what would happen in that scenario:

This time we can see that the success rates are going down more significantly. Let’s see the differences between the two big portfolios:

This time, we can more clearly see the difference if the bond yields were to fall 20%. The 60% bonds portfolio is already falling 8% in that scenario. It is becoming a significant risk for that portfolio. But the 40% bonds portfolio is only falling by 2.6%. It is still something that most people should be able to handle.

Let’s take a more drastic situation. What would happen if yields declined by 50%? In this scenario, the average rate would be about 2.25%.

You may think that a 50% reduction in rates is an extreme situation. But the yields of the last decade have been even lower than this. So I do not think this is such an unreasonable scenario.

Without further ado, let’s see what happens in this scenario:

There are some significant changes in this scenario. Some of the portfolios are not safe anymore. Let’s see in details our two portfolios:

Let’s take a more drastic situation. What would happen if yields fall by 75%? In this scenario, the average rate would be about 1.13%. This is finally lower than current yields.

Now, I do not think this is a scenario that will happen. But this is still interesting to see. While I think that a 50% loss is realistic, a 75% loss is too much to worry about. But we never know!

So, let’s see what happens:

Portfolios with a lot of bonds are taking a very serious hit. With a 75% loss in returns, they are rarely returning more than the withdrawal rate.

Let’s take a final scenario. What would happen if the bonds returned 90% less than their historical average?

We are now looking at an average of 0.455% returns. Given the fact that interest rates were never that low, this is not a realistic scenario. It could happen. But it would take a long time for this to happen. And rates are very unlikely to stay at that level for a long time.

So, let’s see what happens to the portfolios:

I am still surprised that the portfolio with 100% bonds still has a few chances of success. It is a huge gamble. But I would have thought it would be worse. Portfolios with a large allocation to bonds are not expecting to work with such low bond returns. However, since I also reduced the negative returns, they are very stable.

Historical bond returns are much higher than current returns! This is the most important conclusion from this study. So, when we do historical simulations, we are doing it on an average significantly higher than the recent average.

It is important to realize this. I am not saying that the historical simulations have no value! Maybe the current returns will go much higher again, and the average will rise. But I am saying that we need to know that fact.

Now, I realize this is just a synthetic benchmark. Just cutting the returns is not realistic. Since the bond yields are correlated to inflation, if bond returns would go down, inflation would probably be down as well. But I wanted to see what would happen if inflation stayed the same and bond returns fell.

And I really think this simulation has some value. Many people do not realize that bond returns were historically much higher.

I also did a simulation to check our chances of early retirement in recent years. And if you are in Switzerland, I have checked the retirement success rate of Swiss Stocks!

If you like simulations, you should also read about whether you should rebalance in retirement. You may be surprised by the results!

I hope you found this simulation interesting! Let me know if you have ideas for other simulations!

6 thoughts on “Does The 4% Rule work in a low-yield environment?”