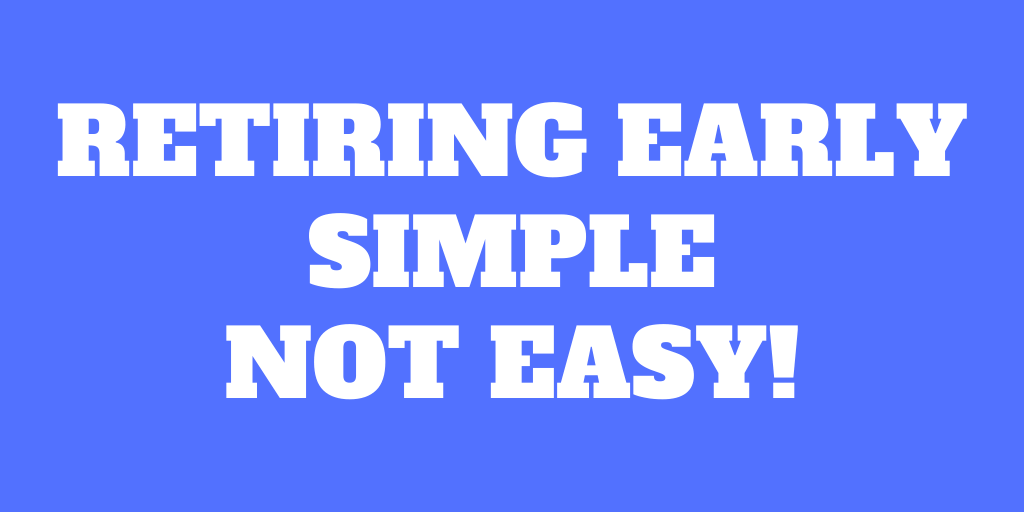 Many people are saying that I make FIRE and early retirement look too simple. And many people are falling into the trap of believing that retiring early is easy.

I want to delve into that important subject. For me, retiring early is simple. There is no doubt. However, it is not easy! The difference is fundamental. And there are no secrets to getting to FIRE. You need to focus your efforts on that goal. And how much effort you are going to put into it will shape how fast you can retire.

So, let’s see why FIRE and early retirement are simple concepts but not easy to reach.

The math between early retirement is extremely simple: you withdraw X% of your portfolio every year, and you can sustain your lifestyle for enough years. X will be your withdrawal rate.

For instance, if you submit the famous 4% rule, you will withdraw 4% of your portfolio every year, adjust that amount for inflation and pay all your expenses with this money.

You will need your money invested in the stock market in a healthy mix of bonds and stocks during that time.

I do not think we can do much simpler than that! The least simple part of this is to choose an asset allocation and a withdrawal rate. But, there are many guides and calculators available to help you with this task.

Retiring early is not easy

It is important to come to the second part of this article: retiring early is not easy! Simple means that it is not complicated and easy to understand. on the other hand, easy means that it can be achieved without effort.

And anybody telling you that it is easy to retire early is lying to you. And unfortunately, there are too many such claims online.

So, why is it not easy? It requires dedication. It will require you to keep your expenses in check. And it will mean you will need to save significantly more money than the average household. For some people, this is easier than others, but this does not come naturally for most people.

Most Swiss households barely save 10% of their income. And in fact, when your factor vacations into the mix, most households save less than that. With a 10% savings rate, it will take you more than 50 years to retire. This means you can forget about retiring early. And even with a 20% savings rate, you will still wait 36 years before you can retire. If you start in your 20s, this could still qualify for early retirement.

This is not easy to achieve and definitely not common.

There are no secrets to retiring early

I am sure you have already seen such claims on the internet: I retired at 35 with these 5 simple money principles

The claims are always the same: just follow a few rules, and you will be on your to retiring early:

And while these rules are important (except maybe for automation) and will help you, just following these rules will not be enough to retire early. If you have a great goal but have no positive cash flow, you will go nowhere for a long time.

The truth of the matter is that to retire really early. You will need to save a large portion of your income. And for that, you can either:

And just saving on your 5 dollars coffee will not make you rich. In fact, for the immense majority of people, it will not make a significant difference. No one thing will make you retire extra early.

I am not saying that it is not possible to retire early on a low income. It is. But it will require either more years to reach your goal or to spend very little money. This is just simple math. There is no way around it.

The road to FIRE is paved with inegalities

When you look at early retirees, we can see a few important points that come often.

First, most early retirees do not have kids. While it is totally up to them to have kids or not, the important point is that not having kids definitely helps your expenses. If you do not have kids, you spend less, and you can travel more outside of school time. Of course, there are some early retirees with kids. It is just more difficult.

Second, many early retirees are software engineers. There is nothing wrong with that. I am a software engineer myself. But the fact of the matter is that we earn more money than average. Earning more money makes it easier to save a larger part of our income.

Finally, many early retirees are spending well below average. Some people live in an RV while others live almost in autarky in the middle of nowhere. This is important because not everybody can spend that little.

Again, there is nothing wrong with any of that. But it makes retiring early easier for some people than for other people. That does not mean it is impossible to retire early if you have kids, are not a software engineer, and live a normal life. But it means it is going to be less easy for you than it was for some people.

The best way to retire earlier for most people is to increase their income. But, again, this is nowhere near easy. But there quickly comes the point where you can’t spend less money, and many people still do not save a lot of money when they reach this point. So, they should try to earn more.

Read between the lines

The main problem is that many media try to make retiring looks easy while it is not. The reason is fairly simple: it is much simpler to sell easy things than it is to sell hard things. For instance, which article do you think will work better:

Hint: Number 1 is going to be read many more times. People want easy things. So media is trying to sell them easy things. It is as simple as that.

So, when you read all these success stories on the internet, you need to read between the lines to find what really happened.

For instance, some people retired in 5 years in the best bull market, having 20% yearly returns. On average, you will get much less than that. And if you start your journey before a bear market hits, your journey is going to take longer.

Another important thing you need to consider is that most FIRE bloggers are getting significant income from their blogs. This makes two differences:

I have to say that I am making some money from this blog, but this is currently not very significant compared to my main income. But this will definitely help me on my way to retirement, no doubt about it.

Finally, do not believe that just having a budget and optimizing your expenses will be enough to retire in a few years. For the immense majority of people, this will not be enough. If you are not among the high-income earners or very frugal people, it will take you many years and tons of dedication (not easy!) to retire early.

I do not want to discourage anyone from retiring early! On the contrary, I still believe that most people can achieve that goal. But it will not be easy. I do not think my own journey to early retirement will be easy. But I think it is worth trying for me.

My main point with this article is that I do not want you to believe that retiring early is simple because it is not. It is fairly simple, but it is not easy. There are no secrets to early retirement! You need to put in the work.

It is also important to realize that while the math behind early retirement works for everybody, it will definitely favor high-income earners and very frugal people. This is a simple truth.

I just wish that there was more transparency online and less clickbait content. However, you need to be aware that most examples are exceptional examples. They should not be used as validation of the lie that retiring early is easy.

If you want to learn more, you can read the basics of early retirement.

I was motivated to write this article after reading this excellent article from Nick Maggiuli.

What do you think? Do you think retiring early is simple?

21 thoughts on “Retiring early is simple but not easy”