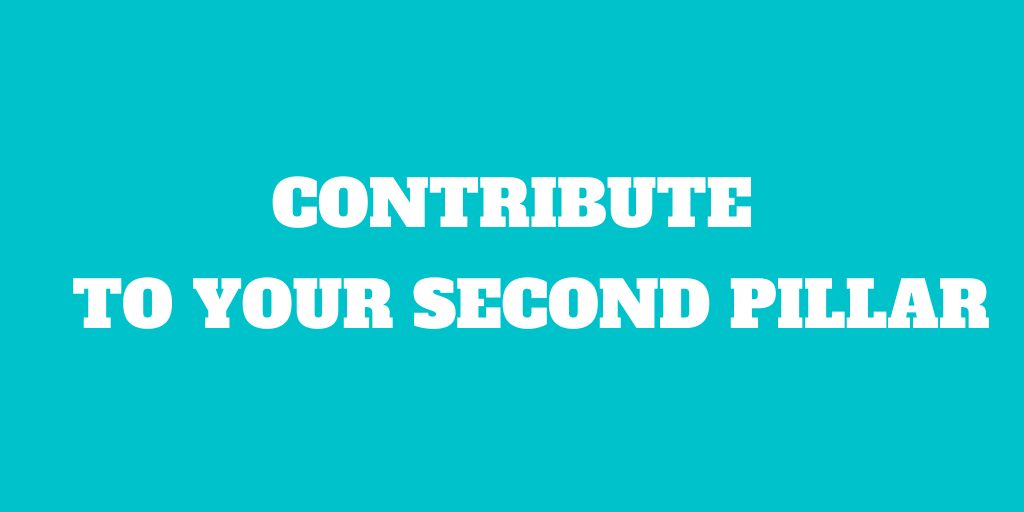 In Switzerland, you can make a voluntary contribution to your second pillar. These contributions come with some tax advantages since you can deduct that from your income. Therefore, you have a return equal to your marginal tax rate. And this return is almost instant.

However, the money is then blocked into the second pillar. And the returns on that blocked money have been very low in recent years. Finally, you can only withdraw the money from your second pillar if you retire, buy a house, or start a company.

Many people ask whether they should contribute money to their second pillar or continue investing in stocks.

In this article, I am going to answer this question.

So how does a voluntary contribution to the second pillar works?

Usually, you pay each month some amount of your salary to the second pillar. And this is matched by your company. You do not have a say in this. So there is no way to optimize that.

However, you can contribute some amount yourself to cover the holes in your second pillar. If you had a low salary when you started, you are sure to have holes in your contributions. When you contribute, you can deduct it from your taxes, just like the third pillar.

How much of a reduction in taxes this will realize is challenging to calculate correctly. It depends on your marginal tax rate. The amount will depend on your income, your wealth, and where you pay your taxes. In most cases, this will be between 30% and 40%. That means that the immediate rate of return of this contribution will be 30% to 40%. We can view voluntary contributions as a form of investment.

Now, the invested money will be blocked until you can take it. In the second pillar article, we have seen only four cases when you can take this money out: building a house, starting a company, retiring, or leaving Switzerland. In those cases, you will lose out a part of the second pillar as taxes. But this is not as much as your marginal tax rate. And voluntary contributions are always locked for three years.

As long as it is inside the second pillar, your money will get some interest. Unfortunately, the interest is currently extremely low now. You can expect about 1% interest in most pension funds in Switzerland. Nevertheless, it is a safe interest for now. It cannot go down. So, you can consider the second pillar as a place to have your bond allocation.

But this is a smaller advantage than the first one. It will still reduce your taxes a little further, but where the first tax advantage can be up to 40%, the second advantage is about 1% in the best case. Nevertheless, it is still important to know that you do not pay any wealth tax on your second pillar.

The obvious alternative is to invest in stocks. We can check how the same sum behaves if invested in stocks or contributed to the second pillar. First of all, let’s run some scenarios to see how that works.

Let’s start with a return per year of 3% for the stocks. This is a very conservative estimate. For the second pillar, we will consider 30%, 35%, and 40% marginal rates. The current interest rate on most second pillars is 1%. So we will take that as the reference. Here are the results for twenty years.

But generally, stocks are returning more than 3% per year. So let’s see what happens with a 5% return per year.

This time, it takes less than ten years for the stocks to go up as much as the second pillar. And they are ending up much higher. This exponential growth is the power of compounding. Even 5% per year can return a lot in the long term. 5% per year is what I expect from the stock market.

Obviously, in practice, you will not get 5% per year. You may get 10% one year and -20% the next year. But this is how the stock market works, and I am prepared for this. You can only expect average returns over the long term.

Now, some people are counting on about 7% of return per year. So, let’s see how that will go:

Based on this uniquely, one should probably not invest in the second pillar.

However, there are other considerations. First of all, it will depend on the term of your investing. If you are investing in the long term, it is probably better to stick with stocks. But if you are to get access to your second pillar soon, it may be a solid investment. It could be a good investment if you are going to retire soon or if you are going to build a house or start a company in the medium-term.

But, do not forget that voluntary contributions are locked for three years. So if you intend to buy a house in the next three years, you should not invest in it.

The other consideration is whether you need bonds in your net worth or not.

So another reason to buy into the second pillar is depending on your allocation. If your bond allocation is too low for your current allocation, you can make a voluntary contribution to increasing it. Given that it also has a nice tax advantage when you purchase, it is probably better than bonds. Especially, it is better than Swiss bonds that have a negative interest rate. If I need to buy bonds, I will contribute to my second pillar.

For instance, here is the allocation of my net worth at the start of 2021:

We currently have too few bonds in our portfolio. We aim for our bonds to be 10%, and it is currently 5.2%. So, it shows that we should contribute a little to our second pillar. Unfortunately, it is not a good time for us, as we will see in the next section.

There are some cases where it becomes very interesting to make such contributions.

This is the case for us. We just withdrew money from our second pillar and cannot get any tax advantage until we contribute at least 50’000 CHF into it. So, without the tax advantages, it does not make sense for us to invest in the second pillar.

These examples show that timing is important for second pillar contributions.

It is clear from the different scenarios from an investment point of view that contributions to the second pillar are not as good as it seems. Even though they have a substantial initial return on investment, they have very little returns per year after that.

Nevertheless, money in a second pillar is an excellent alternative to bonds. They have a guaranteed (at least for now) interest and offer an excellent tax reduction. These tax reductions are something that would be quite interesting to do as one is nearing retirement. But keep in mind that you can only contribute to your second pillar if you have a salary or have your own company.

But it is not necessarily the best investment at all times. Like every other investment, it will depend on your context and your situation. You should consider every element before you decide on any investment. And never make any rash decisions!

What do you think about this? Are you contributing to your second pillar?

67 thoughts on “Should You Contribute to Your Second Pillar in 2021?”