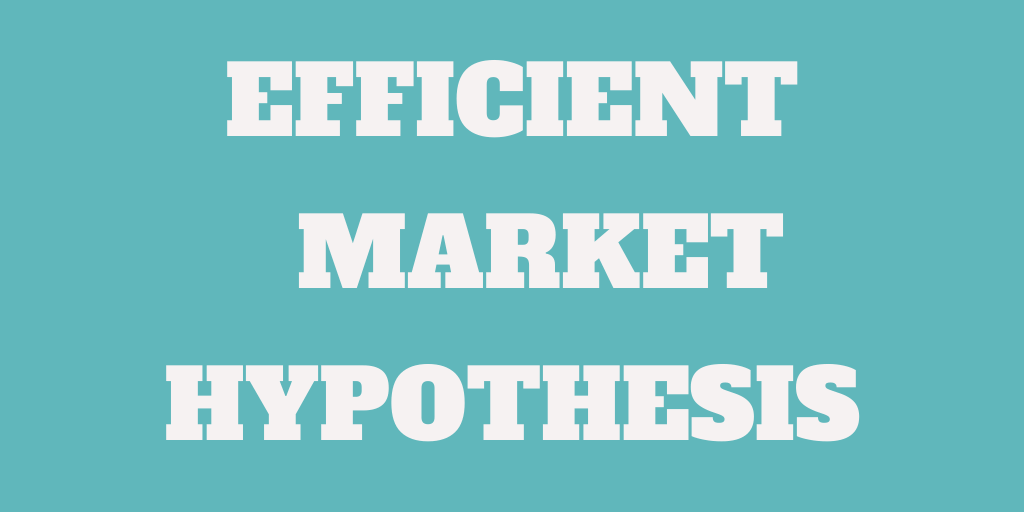 Today, we are going to talk about the Efficient Market Hypothesis (EMH)? Have you ever heard about EMH? Do you know what it is?

Behind this complicated name hides a simple hypothesis. EMH says that the market is very efficient. So the stock prices reflect all available information. It means that stocks always trade at a fair value.

The Efficient Market Hypothesis is interesting. It is also very controversial. Based on whether it is true or not can profoundly change the way you are investing. This hypothesis has many implications, as we are going to see in this article.

So, let’s delve into exactly what this hypothesis is about.

This theory has several significant implications.

First, based on this theory, it is impossible to find undervalued stocks. Since the market already uses all the information, you cannot find an undervalued. Indeed, the stock price is already the fair value of the company. Inversely, you cannot sell stocks for inflated prices. This goes completely against the concept of value investing.

According to EMH, the only way to beat the market is to have inside information about a stock. Trading like this is called insider trading. But this is illegal.

Otherwise, the only way to get above-average returns is to increase your risks. But in that case, we are not comparing the same things.

The EMH theory is often associated with the idea of a random walk in the stock market prices.

So, if the stock market prices are following a random walk pattern, it is impossible to predict the prices of tomorrow.

Variations of the hypothesis

In economic literature, you are likely to find three different forms of the Efficient Market Hypothesis. You do not have to worry too much about these forms. These are small details. But I will include them here for completeness.

With the weak form, stock prices reflect all past available information. And stock prices are completely independent of past prices. With this form, fundamental analysis can work in the short-term. But any technical analysis will not work.

With the semi-strong form, it is assumed that all available public information is directly reflected in stock prices. In this form, even fundamental analysis cannot beat the market.

Generally, the semi-strong form is the one that people talk about. It is also the most reasonable of the three forms.

History of the Efficient Market Hypothesis?

The EMH theory is not new. It is much older than people think.

The first reference to this hypothesis appears in the Ph.D. thesis of Louis Bachelier, The Theory of Speculation. This thesis dates from 1900. He also published a book in 1912. Both the book and the thesis have been cited many times in financial research.

Is the hypothesis true?

Now, this is just a hypothesis. Is the EMH Theory true?

Unfortunately, we do not know that. There is no known way to prove the hypothesis, nor is there is any known way to disprove it. As such, there is a lot of controversy around the EMH.

There is a lot of empirical evidence that supports the hypothesis. But, there are also some exceptions to the Efficient Market Hypothesis. If the hypothesis was completely accurate, many things would not have been possible.

Advocates of the hypothesis

There are many advocates of the theory.

Their main argument for believing in this theory is empirical evidence from funds. We can observe that most managers of active funds do not outperform the market in the long-term.

John Bogle already showed it. He worked on several papers and books outlining that active funds do not outperform the market. So, it is better to invest in low-cost index funds.

Proponents of the hypothesis

As with each unproved theory, there are also some critics of the theory.

For instance, several people are claiming that The Great Depression was caused by too much belief in EMH. People were too confident in the efficiency in the stock market and invested irrationally. And this irrationality caused the market crash.

The best resource I have found on the subject is The Efficient Market Hypothesis and its Critics, by Burton G. Malkiel. He is the author of a Random Walk down Wall Street. His paper on the theory is well written and contains a wealth of information.

Malkiel is an advocate of the theory and recommend people to invest in broad index funds. However, he also recognizes that the theory has some limits. There will always be some inefficiencies in the market. And some periods will be more or less efficient than others.

There are some psychological and behavioral factors influencing the stock market prices. But Malkiel argues that these factors are also random.

For instance, several bubbles in the stock market were not efficient. But hopefully, these bubbles are the exception rather than the rule. And overall, the market will be efficient in taking into account the available information.

I think this is an excellent view of the Efficient Market Hypothesis. People should not blindly follow this theory. But they should not reject it either. Even if there are some small inefficiencies in the market, this does not mean that we can easily beat the market. The market is efficient up to a certain measure.

Implications of the hypothesis

What does the Efficient Market Hypothesis mean for investors?

It does not mean anything that we have not already covered on this blog. Since it is impossible, or at least extremely hard, to predict the stock market prices, we should not even try. Therefore, investors should invest in broad index funds.

There are many advantages to passive investing:

All these advantages and the fact that the market is already very efficient makes passive investing the best candidate for the majority of people. There will always be people picking stocks. But most people should focus on index funds.

The Efficient Market Hypothesis states that the stock market is very efficient. It is so efficient that it already takes all information into account. If the hypothesis is correct, it should be impossible to beat the market, especially in the long-term.

I think the market is efficient. But I do not believe it is without inefficiencies. I believe there are a lot of human factors playing a role in the stock prices. And these human factors can be wrong.

Even though I do not believe the EMH theory is entirely accurate, I still believe that passive investing is the way to go! The market is very efficient. As such, it is challenging to find opportunities to beat it consistently. Moreover, it is so much simpler to invest in an index fund.

To learn more about investing, learn how to design a passive portfolio.

What do you think about the Efficient Market Hypothesis?