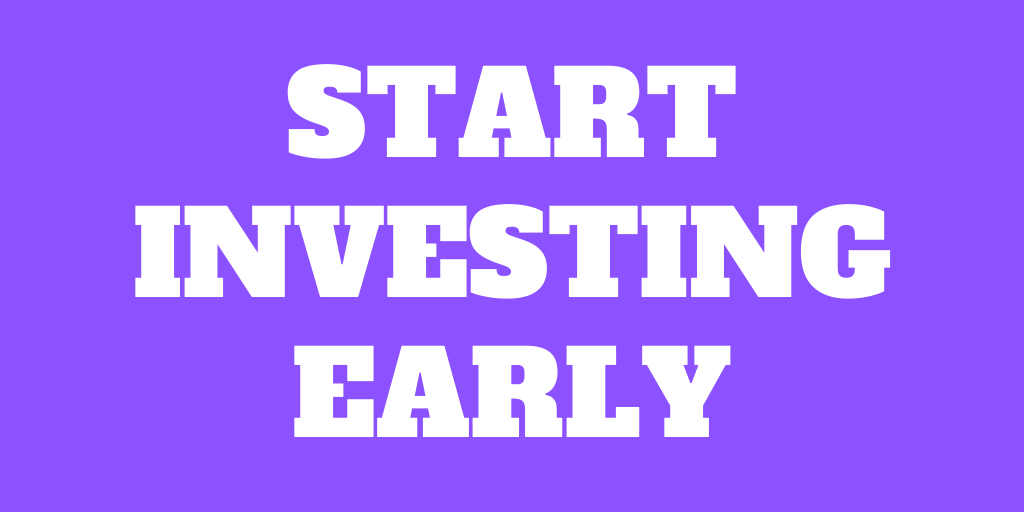 Investing is a long-term game. The average returns are good. But you will not see instant results. You could see a few bad years as well. If you do not give it time, you will not be able to reap all the benefits of investing.

In this article, we will see that there are many reasons why it is interesting to start investing early. And retiring early is not the only reason to invest!

The first reason to start investing early is about compound interest.

The earlier you start investing, the more important will your returns be in the long-term. If you invest early for 30 years in the future, your money will grow significantly more than if you invest ten years later.

Let’s see how this translates into theory. I am going to assume 5% yearly returns on the stock market. We are going to take three scenarios:

Here would the results after 30 years of investing with the three scenarios:

We can see that there are significant differences based on when you start investing. It should make sense to everybody. However, most people are surprised at the considerable difference. If you invest today, you will have more than twice the amount of money in 30 years than if you started investing in 20 years.

This difference is quite significant and shows the power of investing early. The fact that there is such a significant difference should show you that even investing small amounts of money early and holding on to it is very valuable.

Ideally, you want to invest every month, not once. So, let’s see what happens if each of the persons invest 1000 CHF each month on top of the 10’000 CHF starting sum.

After 30 years, if you start investing directly and then each month, you will have three times more money than the person investing only after 20! There is an 80’000 CHF difference. It is not negligible amounts.

This time, the difference is less significant. But you will still have 48’000 CHF more than if you waited 20 years with this money in a bank account.

These results together really show the significant advantage of starting investing early! If you have long-term goals, starting as soon as possible plays in your favor!

If you want to know more about this subject, I have an entire article about compound interest.

You can spend less when you are young

Another excellent reason for starting to invest early is that people spend less when they are young.

When you are young, you have several advantages:

With these advantages, it could be a great time to try to spend less and save more. And since you are saving more, you should try to invest this money as soon as possible.

You will learn valuable lessons

Investing is not as complicated as it looks. However, it is not trivial either.

Many people are afraid of investing. They think only brilliant people can invest in the stock market. But this is just another investing myth.

This way, you will be able to start investing a little while you are still learning and then increase your investments when you get more confident.

Habits are essential in general. And they can help your finances a lot. To help form my habits, I have developed a monthly personal finance routine.

You may want to retire early

Many people do not invest because they say they will not need to retire early.

Now, it is true that not everybody wants to retire early. And it is also true that given the current retirement in Switzerland, you may not need to invest money to retire well.

However, there are two flaws with this logic. First, even though you may not want to retire early now, you may change in the future. You can change, or your job can change. If you realize at 50 years old that you want to retire as soon as possible and have never invested, it may be difficult for you to catch up.

The second flaw is thinking that investing early is only for retiring early. If you start the habit of investing, you may have money when you need it. You could invest your money to get a house faster, for instance. There is absolutely nothing wrong with that. You could even invest your money in doing expensive vacations.

So, even if you do not currently want to retire early, you should not consider that as an excuse not to invest. There are other reasons to invest!

You do not need a lot of money to get started

One investing myth is that you can only invest when you have a lot of money.

In the first section of this article, we have seen that investing directly in low amounts returns more than investing the same amount later in the future. So, if you only have 100 CHF to invest now, just go ahead and invest 100 CHF. If you can invest 100 CHF per month on top of that, you will already be on your way to a great investing journey!

Your invested money is more difficult to spend

If your money is invested, you will be less tempted to use it than if it was on a bank account.

For people that have difficulty saving, it could be good to invest their money regularly. Then, they may be less tempted to spend this money. It is only a kind of trick. But this kind of method can work for many people.

A lot of people, when they have a lot of money in their bank account, will spend it quickly. But if they have money on their broker account and if they see it increases over time, this may protect them from using this money for their expenses.

So, if you have difficulty avoiding spending your money in your bank account, try investing this money!

As you can see, there are many benefits to start investing early. And you do not need a large amount of money to get started.

By starting to invest early, you will let compound interest work longer. So you will have more money in the end than if you had waited longer to invest. And it will also help you form good investing habits.

If you have long-term goals for your financial life, you should consider investing as early as possible.

What about you? Did you start investing early?

8 thoughts on “You should start investing early! Here’s why!”