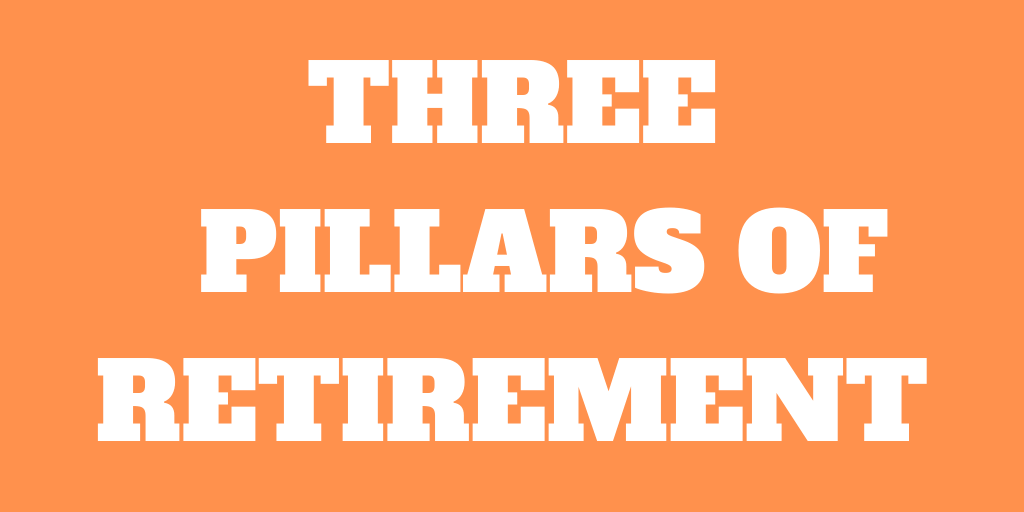 I have already covered in detail each of the three pillars of retirement in Switzerland. In this article, I want to summarize the entire system. I am also going to talk about how early retirement works in this system.

It is essential to know about the three pillars if you want to retire in Switzerland.

Let’s first summarize the system of the three pillars.

The first pillar is a mandatory state pension.

Everybody pays this directly either from their salary or with a bill if they do not work. And everybody in Switzerland is entitled to get a pension from the first pillar. What you will receive from the first pillar will depend on your salary and how many years you contributed. However, it will only cover the fundamental needs of your life in retirement. And there is very little you can do to optimize your first pillar. That is why the other pillars are essential.

The second pillar is an occupational pension for workers.

Only people who work are contributing to the second pillar. And consequently, only people who contributed to it will receive a pension (or a lump sum) once they reach retirement age. The second pillar is more complicated than the first pillar in that it will depend on the company you are working for.

Moreover, you can also contribute voluntarily to it. There are some tax advantages to doing so. Find out whether you should contribute to your second pillar.

The third and last pillar of Switzerland’s retirement system is a private pension.

Choosing a third pillar account is not an easy task. Currently, Finpension 3a is the best third pillar in Switzerland.

If you are interested in early retirement, you have seen that none of the three pillars covers it.

You can withdraw the second and third pillars at most five years before retirement. Currently, this means that you can withdraw money at 60 years old. But early retirement means retiring earlier than 50. Some people even retire before 40. If you plan to retire significantly earlier than Switzerland’s legal retirement age, these three pillars will not help you a lot.

But, the current system is still helping for early retirement. While the three pillars may not cover your expenses after retirement, they will cover most of it. If you have invested enough in the second and third pillars, you should be covered. That means you only need to save for the years between early and official retirement. I say only, but it is not easy. But after official retirement, you will have new income (first and second pillar) and new savings (third pillar). Also, since you get tax advantages with three pillars, you will save more before you retire.

But you will have to pay the first pillar for these middle years. Indeed, you are entitled to pay it until your official retirement age. If you do not work, the amount you have to pay is based on your net worth. So, if you accumulate a lot of money, you may have to pay significant first pillar fees each year. However, I do not think this is a large problem. But it is something that you have to take into account.

Let’s start with the good. It is somewhat flexible. You have many choices for the third pillar and some choices for the second pillar. It is somewhat fair. The first pillar is socially fair. Indeed, the rich will pay significantly more than what the poor will receive. And they will not receive significantly more. It forces you to save for retirement. The first and second pillars are forced savings. This means that everybody will save at least something. With this, everybody will have at least something. This is a good thing, in my opinion.

Now, let’s see what could be improved. As I said, it is a good system. But it is far from being a perfect system, in my opinion.

First, the system is too complex. It took me over 7000 words to cover all the details in the first three articles. And I did not cover several things such as divorce, death, foreigners, or self-employment. While doing my research, I learned a lot. I had to gather information from many sources. In my opinion, it could be simplified. Or, at least, there should be a complete source of information. Moreover, the biggest issue is that it depends on each state. There are big differences from one state to another.

Strategy for the Three Pillars

Let’s recap the main things about the three pillars to get the most out of them.

For the first pillar, there is not a lot you can do. Depending on your life expectancy, you could choose to take it early or late. This could significantly change the pension you are going to receive. But of course, nobody knows its life expectancy. So this is only an educated guess.

That should cover the basics of each three pillars. If you want the details, you can read the other parts of the series again!

Finally, here is my current strategy regarding the three pillars:

I think I have covered everything important about the three pillars system. I hope this will be helpful! If you live in Switzerland, it is important to know these things.

You need to make the best use of these three pillars to retire properly in Switzerland. They are even more important if you do not plan to retire early. They will really be the pillars of your retirement!

If you do not know where to get started, learning about contributions to the third pillar is the best way.

10 thoughts on “The Three Pillars of Retirement in Switzerland”