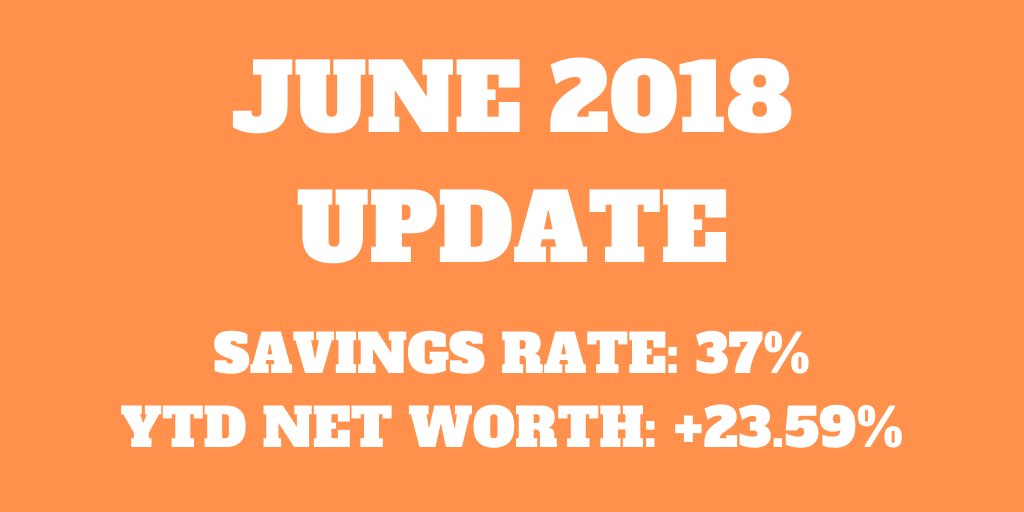 Fewer things happened in June 2018 than the crazy previous month!

Although it is a good month for savings, it is not as good as I planned. This month is the first month I received my new salary :) But it was a very expensive month :( We had to pay many insurance fees. And several other relatively big expenses. But it is still not too bad :)

Read on if you want to know what happened to use in June 2018!

At the beginning of the month, I started a new job. I have a better salary and several new advantages. My new net income is now about 9000 CHF per month. And this month we have sold a few things online for a bit of extra income. Nevertheless, even with all this income, we managed to have a lower savings rate than I was expecting. We saved 37% of our income this month! Of course, it is not bad. A lot of people do not save that much. I probably had too high expectations.

You may remember last month I was saying that we may have to pay a lot for insurances this month. This turned out really true! I was thinking we could get the cost down this month, but once again I was wrong :(

Last month, I did a comparison of credit cards in Switzerland. Since then, I ordered my Cumulus Mastercard. The card has not yet arrived. I have also ordered a Revolut credit card to avoid foreign exchange fees. This should save me some money each year :)

Last month, we started our own vegetable garden. It is now bearing its first fruits (if I can say so ;) ). We just got our first salad :)

It was also the first time we built our own furniture. We really enjoyed our first DIY project. And the result looks really great :)

We did not plan for it to look exactly like the wall! It is just a nice bonus!

Until last mid-June we did not get any news from the insurance. And suddenly I received all the bills. We did not receive any communication because now it is done online. But they never contacted us to say that our online account was ready. What did they expect? That I would go there every day and check if the account was ready?

And they made us take the insurance from the first day of my wife arrival in Switzerland. Since apparently, it is the law… All this without any communication. The first communication was the bills. In the end, we had to pay about 1000 CHF in one month for Assura. I really did not like this communication system. At the end of this year, I plan to move both our insurances out of Assura. They are really too bad…

We also had some other big expenses this month. We had to pay my house insurance (assurance ménage) and civil responsibility insurance (RC).  Plus, we also had to pay almost 300 CHF for the gym for Mrs. The Poor Swiss. We also took some tickets for a concert in November. And we went to my cousin’s wedding and offered some gift. Finally, I also paid for the new hosting of the blog. All this and many small expenses and this makes for a very high expenses month.

Here is the final breakdown of all our expenses for June 2018:

Let’s take a look at the status of my goals for this year as of the end of June 2018:

Once again, I did not reach my goal of staying below 4500 CHF of monthly expenses :( Next year, I will use an average instead of an absolute. And I am starting to believe that 4500 CHF is not doable anymore now that we are two. But we will still try to skim our budget a bit more. Next month should be under 4500 CHF normally.

As for the other goals, I have finally got a nice dividend from my Vanguard Total World ETF, about 137 CHF. Finally, the dividend income of 500 CHF this year does not seem impossible anymore. I am still waiting to be able to get rid of my last PostFinance fund. It is going down every month a bit more :S I also wish I could get rid of my Bitcoin ETN, but it is also going more and more down :(

The last goal that is not yet done is the DEGIRO referral. I have given up hope on this one.

This represents a Year-To-Date increase of 23.59%. This is only due to adding money to my accounts. Unfortunately, the market is still very unstable. It is only going up and down without a clear direction. It has been 5 months now that the market has not been doing well. I hope it goes into a clear direction at some point. I would even prefer it going well down and not staying like this. A flat market means no returns and no opportunities for buying more shares. We will see what happens in the future. My estimation is that we are going to reach 110K in August. We will see how it goes :)

As for the blog, I have again been able to write many articles. And I have now transferred from Bluehost to SiteGround. After all the problems with Bluehost, it was necessary for me to migrate. This took some time and made me a bit slower to write new posts. Nevertheless, it is now behind me. As for the audience, no change, since a decreasing audience. The huge peak last month because of the feature on Rockstar Finance did not last. I am again at numbers that were there before this post. And actually even below now ;) The more I post and the fewer people read ;)

It is now been two months since I started using Pinterest. Already last month I had a lot of doubts. And now it is confirmed. I had around 20 visits from Pinterest. This is less than Twitter even if Twitter is already low (in the 50s). And I do not spend much time on Twitter. I am not going to chase the audience anymore. I am giving up on having a big audience. Instead, I will simply keep writing for my pleasure whether people are reading or not.

Next month I do not see any big expense coming. But I am not very good at estimating next month’s expenses. So I can be totally wrong ;) We will see next month how it goes. The only expense I know about is the Billag bill. This is the tax I am hating the most about Switzerland. It is a completely useless and unfair tax. But we have to pay for it. At least next year, we will pay less, but it will still be useless…

We are definitely going to be more careful with our expenses. We are going to limit expenses as much as we can. One thing I am going to do is change my internet connection. I am going to move from a 100Mbs connection to a 40Mbps connection. This will save us 20 CHF per month. It is not a lot, but it is a start.

What about you? How were your finances in June 2018?