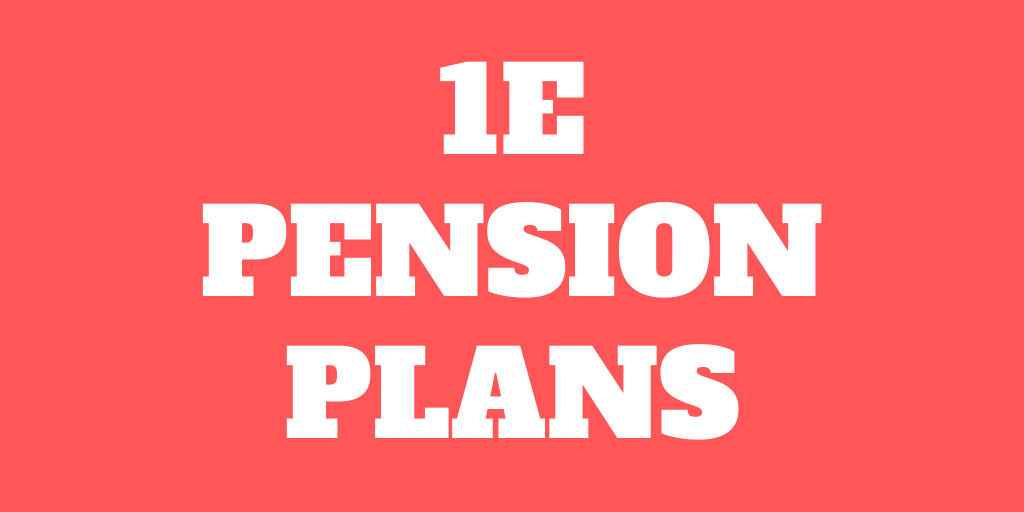 I have talked in detail about the retirement system in Switzerland, the so-called three pillars. However, I have not yet talked about a not well-known part of this system: 1e pension plans.

In this article, I want to cover in detail 1e pension plans. These pension plans are sometimes called pillar 1e. We will see what it is all about, who can profit from it, and more!

In Switzerland, most people are aware of the existence of the three pillars, even if many people are not entirely knowledgeable about them. However, most people do not know about the 1e pension plans or pillar 1e. The reason is simple: it is reserved for people with a very high salary. Let’s see how.

Another reason people do not know about it is that employees cannot choose to invest in 1e pension plans. It is up to the employer to provide a 1e plan for their employees. So, even if your salary is higher than this limit, your employer would still have to enroll you in such a plan for you to profit.

It is important to note that people with a 1e have both a 1e and a second pillar. If you are eligible for a 1e pension plan, only the part of your salary higher than 129’060 CHF will contribute to the 1e plan. The rest will go as usual to the second pillar.

For these two reasons, most people do not know about this pillar.

Advantages of the 1e pension plan

While not well-known, this pillar is very interesting for employees.

Indeed, employees enrolled in a 1e pension plan can choose their investment strategy. Where most second pillar pension funds are extremely conservative and have extremely low returns, a 1e fund can be much more aggressive and yield nice returns in the long term.

This can make a major difference in the long-term for your retirement assets.

On the other hand, since your assets are invested, there is no guaranteed interest rate. So, not only are the returns not guaranteed, but you can actually lose money in your retirement assets. So, you need to choose your investment strategy according to your risk capacity and asset allocation.

There are also advantages for employers since this could make them more attractive on the job market.

As of 2020, there was about 5 billion CHF managed in 1e pension plans in Switzerland. While these plans have existed since 2006, they only started becoming popular since 2017 because, before that, the pension funds had to bear the losses, making this plan unattractive for fund providers. But now, employees are bearing the losses (and profits, of course), so more and more providers are offering such plans.

There are few disadvantages to these 1e pension plans.

The first disadvantage is that very few people can profit from it. Even in Switzerland, most people will not have access to a 1e because of the high salary required. And even if they have the necessary salary, their employer may not offer this option.

The second disadvantage is that a 1e pension plan will tie you to an employer. Indeed, when you change employer, you will have to transfer these assets to a new provider. It means that you will be forced to sell these assets. If this happens at the wrong time in the stock market, it could be detrimental. If you are transferring to a vested benefits account, it may be easier since they will be reinvested again. But if you transfer to another employer, they will likely be poorly invested again (unless the new employer has a good 1e again).

But there are a few exceptions to this disadvantage.

There are a few other differences between the standard second pillar and the 1e pension plan.

In most cases, you will not be able to get a pension from a 1e pension plan. You will only be able to get a full capital payment. Other than that, the rules for withdrawal (and early withdrawal) are the same as for the second pillar.

An important difference is that assets are segregated per investor (or sometimes per strategy). In a standard second pillar, the funds are put together, and the fund is paying for retirees with the money coming from the current employees. In a pillar 1e, the money is entirely for you. You only pay the investment fees. This is a great advantage since you can profit more from the stock market’s performance and choose your strategy.

They are a great 1e foundation offer as well. They let you invest in one of 10 different investing strategies. Some are very conservative, while others are very aggressive. This solution is great for young people and people close to retirement. And as usual, they are using index funds to minimize the fees.

So, if you are looking for a good 1e foundation for your employees or want to recommend one to your boss, yourpension is very likely a great choice!

Overall, the 1e pension plan is a great option to improve the returns on your second pillar. The main problem is that it is only offered to a tiny portion of the Swiss population. First, you need a very large salary to enroll. And second, it is still up to your employer to enroll its employees. You cannot enroll by yourself.

I believe that this kind of pillar should be offered to many more employees. And we should be able to enroll by ourselves like we choose the third pillar. But I doubt it will ever change. (And maybe I am salty because I do not have access to one).

If you can enroll in such a plan, it is an excellent opportunity if your risk capacity allows it.

With that, you know all you need to know about the 1e pension plan, the least well-known part of the three pillars system.

If you have access to a 1e pension plan, I would love to hear about your experience with it.