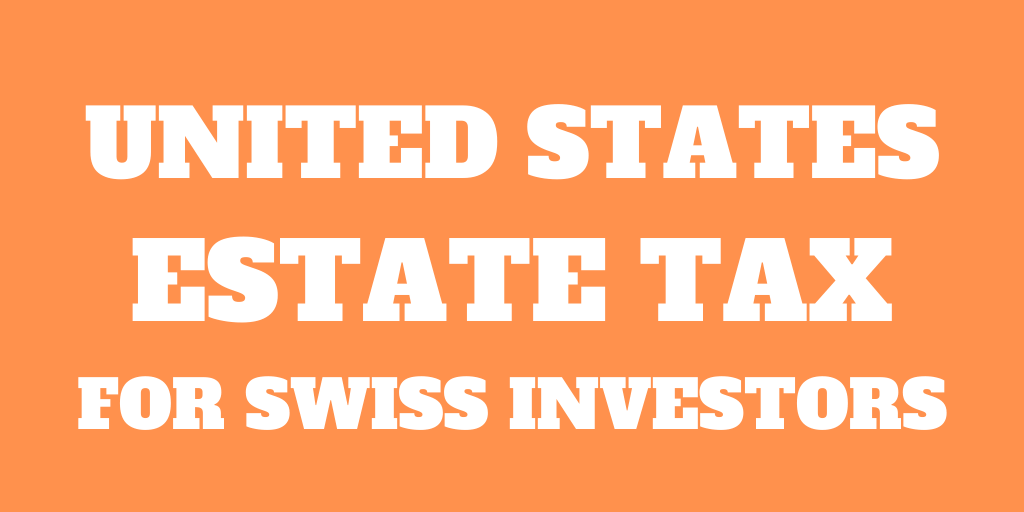 Many people think that investing in the United States Exchanged Traded Funds (ETFs) is dangerous. They believe that because of the U.S. Estate Tax, they will lose a lot of money. This tax will heavily tax the assets of a decedent.

The U.S. estate tax means that your beneficiary will only get a portion of your estate when you decease. Because of that, many people recommend not to invest in American ETFs (or even stocks).

But is that even true? Not really! Indeed, many people forget about the U.S. Switzerland double taxation estate tax treaty.

In the United States, when an estate is transferred from a deceased person, the beneficiary has to pay a tax on this estate.

This U.S. Estate Tax law taxes inheritance at 40% of the value of the estate. It is a very significant estate tax. It is among the top estate taxes in the world.

For American citizens, estates of up to 11.18 million dollars are exempted from the U.S. Estate Tax. It means that most American investors do not care about this law. Very few investors have estates worth that much money.

However, this law also applies to non-resident aliens. It means it applies to everybody who invests in U.S. products. And unfortunately, the large exemption of 11.18 million dollars only applies to U.S. citizens.

Non-resident aliens only have an exemption of only up to 60’000 dollars. It means that if you have U.S. assets valued more than 60’000 dollars, you will have to pay this estate tax. You will not be paying this tax, but it will be the beneficiary of your estate, likely your spouse.

Because of that, many people assume that they should not invest more than 60’000 in U.S. ETF. But this is not true in Switzerland!

The United States has many tax treaties with other countries in the world.

The United States has two kinds of tax treaties:

For this current problem, we are only interested in estate tax treaties.

These treaties can change how citizens of other countries are taxed either on income or on the estate. In the case of estate tax treaties, these treaties generally provide better conditions for foreign citizens.

The United States has about 60 income tax treaties currently. But they only have 15 estate tax treaties. And fortunately for us, Switzerland is on the list. It means that this treaty must be taken into account if we want to consider the U.S. Estate Tax.

In 1951, the United States and the Swiss confederation signed an estate tax treaty. To this day, this treaty is still valid. And this tax treaty is perfect for Swiss investors that have U.S. assets.

The official name of the tax treaty is “Convention between the Swiss Confederation and the United States of America for the avoidance of double taxation with respect to taxes on estates and inheritances”.

The law article states that decedents citizens of Switzerland (or domiciled in Switzerland) have a right to a certain proportion of the same exemption that would apply to a United States citizen. We saw before that this exemption was 11.18 million dollars.

If you want all the details, you can read the original 1951 U.S. Swiss Estate Tax Treaty. It is a relatively short read. And I would say that for an official document, it is a straightforward document.

Let’s make a few examples to make it simpler:

As you can see, most investors will end up paying no U.S. Estate.

So I will get an exemption of  7.1552 million dollars. It is much more than the value of my U.S. assets. So I do not expect to pay any U.S. Estate Tax.

For Swiss investors, the U.S. Estate Tax is of little concern! Switzerland and the United States have an excellent estate tax treaty.

There are only very few cases where you would even pay this tax. It is only when you have a substantial net worth (we are talking more than 10M) and a small proportion of U.S. assets.

If you are from another country in Europe, you can look out if your country has an estate tax treaty with the United States. If they have, you can try to find details about how this will impact you. If they do not, you will only be exempted up to 60’000 U.S. dollars. And you should probably avoid having more than that in U.S. assets.

Talking about U.S. ETFs, you may want to learn about why Swiss investors may lose access to them.

17 thoughts on “Should Swiss investors worry about the U.S. Estate Tax in 2021?”