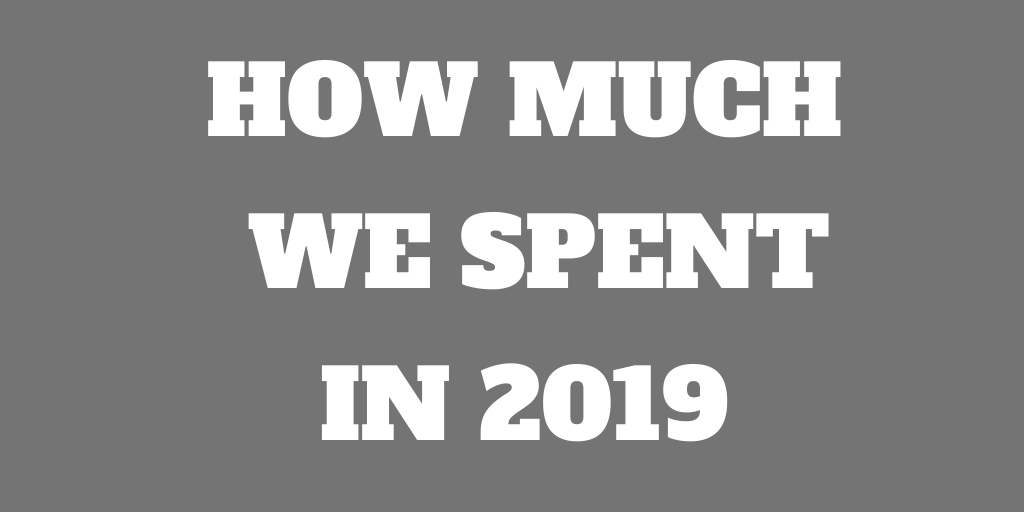 It is time for a full expenses report for the entire year 2019. I am already doing an expense report every month. But having a yearly view helps put things in perspective.

I think it is essential to do this. It shows that some expenses that you feel are small can quickly pile up. 400 CHF per month may not seem much, but this 4800 CHF per year! And this sounds like a lot of money!

Another advantage of doing that is to clean up all your expenses. In my budget tool, once I aggregate all our expenses together, I often see some small mistakes in my accounting. Once fixed, it makes the entire year nicer.

For tracking our expenses, we are using seven categories. So, here are the totals of each category for 2019 (sorted by amount):

We can see that we improved our expenses a lot for some of the categories. But we also completely blew it in some of the others.

However, when looking at this, there is something good. The main non-mandatory category (Personal) is where we were able to reduce the most. There is not much we can do about the Apartment, Insurances, and Taxes.

And for a more visual view, here is the breakdown of the expenses for 2019:

We can directly see that some of the categories overweight others. Personal expenses and apartment expenses already make for 50% of our costs.

Keep in mind that some of the expenses may not be comparable. For instance, I recently changed the way I am paying my car insurance from twice a year to once a year. It makes it more challenging to compare it.

Now, we can take a look at more details at some of our expenses for 2019. I am not going to look at every single expense. Even when aggregated over the entire year, some expenses are too tiny to get into details.

For instance, do you need to know we spent 46.75 CHF on fireworks for August 1st? Or that I spent 1.50 CHF on bullets for the mandatory yearly shooting test for the army?

But if you want to know something specific that I did not outline here, feel free to ask in the comments below!

For our rent, there is not much we can do. We can hope for a reduction in the reference interest rate. But this will probably not happen soon. As for taxes, it will increase even more next year. And since we are planning on buying a house next year, we are not going to contribute to the second pillar next year.

I plan to reduce the price of our health insurance next year. We can cut down our supplementary coverage.

Some may argue that the rent is not mandatory. But you need a place to live. And if you own a house, you still pay rent in the form of interest to your bank.

Our grocery expenses significantly increased compared to last year.  There are several reasons for this:

Nevertheless, even with these reasons, I think we are spending too much. We are now paying 367 CHF per month. I also believe that we were less careful with some of our groceries this year. We will have to work on that next year.

I think we should get back to below 350 CHF per month on Groceries. I do not know precisely how, but we are going to have to find that out!

The main difference is that in 2018 we went on our honeymoon. It cost us a lot of money. So, it makes sense that we spent less this year.

In 2020, I think that this will be a bit lower. We plan on doing only one big vacation. But this may change.

One significant expense that we had this year was the French courses of Mrs. The Poor Swiss. She took classes at Migros School Club. I think that the quality of the classes was excellent. But it is a bit expensive.

It is a great thing that she took so many courses. Her French is getting better and better. But I think that the offer in our part of Switzerland is not suitable for higher levels. Now she does not find courses anymore for higher levels of French.

For now, we do not plan on spending money on French courses for 2020. But if we find an excellent course, we will probably take the opportunity.

In 2019, I had to replace my computer. The motherboard completely died. It was already four years old. To save money, I could have replaced the motherboard with an old one.

Instead, I decided to replace it with a recent one. It means I had to change my processor, memory, and GPU. Hopefully, this will last for a long time.

This price is not so bad since the last one lasted for four years. I hope my current configuration will last even longer. And the case remains the same.

For 2020, I do not expect any significant expenses like this. But of course, if something breaks, it may prove me wrong!

In 2019, we spent less on gas than in 2018. I do not know exactly what caused this difference. This reduction is not a huge difference. But this is good!

One difference is that we do not drive only for Mrs. Poor Swiss driving lesson. We only drive when we need it now. And we probably have been away less this year.

I think this is a pretty reasonable level of expenses for gas for us. Next year, we are going to try to stay below 100 CHF per month as well.

Our health bill went nuts this year! We spent twice more on health than last year.

Mrs. The Poor Swiss needed to remove one tooth and fix two others. She had to go three times to the dentist for that. These three visits cost us 840 CHF in total. Fortunately, our secondary coverage insurance did cover 300 CHF of that, at least.

Aside from this, the expenses were somewhat normal. I went once to the dental hygienist. I also needed to take some medicine for my iron deficiency and problems with my knees.

We have been much better at frugality with eating out than last year. We only spent about 70 CHF per month eating this during the year.

We had several dinners and lunches with friends this year. And we also went several times with only me and Mrs. The Poor Swiss. I think this is a reasonable amount for the year.

We may want to reduce that slightly for next year. But this is not catastrophic.

However, about 480 CHF was for the ski equipment for Mrs. The Poor Swiss. Half of this is for clothes for skiing. The rest was for renting the equipment itself. So this means, we already have some part ready if we were to ski again.

We will probably not ski in 2020. Mrs. The Poor Swiss is not really motivated to start again. And my knees are getting painful. I would rather spare them for one year. But we will probably start again later on.

When we ski again, we will use some of our tips to save money on skiing.

To reduce this, we switch to a slower plan. And we did not notice any difference.

I know I could get it even cheaper at some other providers than Swisscom. But I refuse to do that. We are using the internet at home every day, me and Mrs. The Poor Swiss. And I have never had any issue with Swisscom. Compared to what I hear with other providers, I am not ready to change that!

So, unless Swisscom proposed a cheaper plan in 2020, we should be at the same level.

In 2019, we had to buy several pieces of furniture:

Hopefully, we will not have to buy many pieces of furniture in 2020. However, if we find a house to buy, we may have to purchase a few things.

In 2019, we were able to cut down our expenses for clothing.

I personally rarely buy clothes. I already have too many to my taste. And I do not enjoy clothes.

But Mrs. The Poor Swiss likes clothes. But in 2019, she was reasonable about buying new clothes. She already has a ton of them.

I have been a bit lazy because I already found a better mobile plan for me. Changing to a new phone plan is something I will do early in 2020. Hopefully, I can cut about 30% out of my phone bill.

Even though we spent more than last year, there are a few things we improved this year.

I was able to cut my internet bill and my phone bill. It does not make a massive difference for the year. Indeed, I did not change at the beginning of the year. But this will make a significant difference in the long-term.

I was able to cut our coffee bill significantly. Last year, we were drinking Nespresso coffee. This year, we switched entirely to Lidl coffee. Even though Nespresso is indubitably better, I do not miss it. Lidl is entirely acceptable. And it is about three times cheaper.

We have been able to lower our power bill. It is excellent and not only for money reasons. We want to try to save even more next year. My computers are probably what is using the most power in our household.

Overall, many of our bills have gone down. But several new bills such as ski, french courses, and a new computer were added to our expenses. We also need to work on trying to avoid some of these extra expenses.

There are several things we should improve in our budget in 2020.

We need to improve our grocery bill. I think that there are some things where we could spend less. We have been less careful than usual this year.

I will also spend less on online gaming in 2020. I did not count accurately this year and ended up spending twice more than last year.

One other thing we need to improve is to try to cut spendings on some small things that accumulate. This problem is mostly on me. But I bought several small things for our home. For instance, I still spend money to simplify our home automation system. But honestly, it would have been better to get rid of it. Also, we spent a bit too much on pieces of furniture. We need to work on that for 2020.

But there are still many things we can do to improve our expenses in 2020. For instance, we are going to try to reduce our food budget. We are mostly going to focus on reducing some of the unexpected small expenses that add up during the year. Some of them are not necessary for us.

Working on these small expenses was mostly our conclusion upon doing that. We have too many small expenses that should not have been necessary during the year. We need to consolidate to have fewer of them for 2020. We need to refocus our expenses on things that matter.