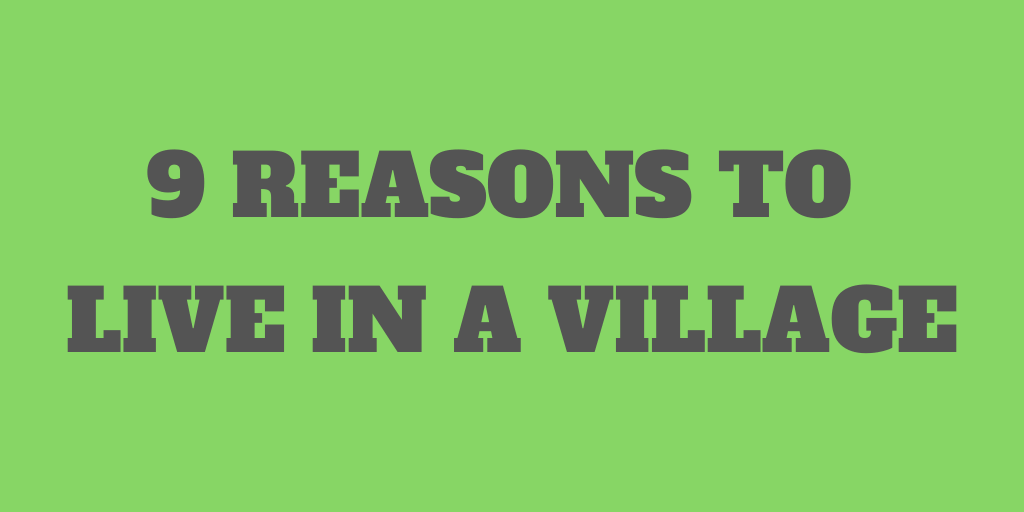 I have lived in a small village all my life. I have lived all my life inside the same village. And I do not want to change this. A lot of people find this very surprising. Today, we are going to discuss why anyone would want to live in a small country village.

For me, there are too many advantages to living in the countryside and especially in small villages. Of course, there are also disadvantages and some people may not like it. But for me, it is excellent!

In this post, we are going to focus on the main reasons why I love living in our small village.

A lot of people will not agree with me, but I love the quietness of small villages. It is great. You can rest on your balcony and only hear the bells of the cows and a few other animals. There is almost no traffic and no people shouting in the street. The silence is something I like.

And most of the time, you do not get unwanted guests. There is very rarely anyone coming to the apartment that I have not invited before. Of course, there are exceptions. But it’s really rare. There may be the occasional visit of the Jehovah’s witnesses!

2. You can get more space

If you live in a village, it is easier to get a larger apartment or even a house. Of course, you can also find big apartments in cities, but the prices are not comparable. I say that, but our current is not large at all. We have around 70 square meters. Our apartment is not big by village standards. But so far, it has been enough.

Space in the apartment is great, but space around the apartment is much better! We have about 150 square meters of lawn around my apartment. Our lawn is enjoyable. I need to have a terrace on the ground floor. Having a garden is just something I cannot live without. There is nothing better than to go outside after work, have a coffee, and read a great book. And we can also receive guests for lunch or dinner out on our lawn.

For a frugal person, this is very important. Apartments in the countryside are cheaper than apartments in cities. It is true when we are comparing apartments of the same size. For the same price, you can get bigger apartments or houses.

It is especially true if you want some space around your apartment or house. The price of land is more affordable as well. And restaurants in the countryside are also sometimes cheaper. However, most restaurants in Switzerland are not cheap.

Even though there may be some exceptions, cities are quite ugly. Buildings are, most of the time, not nice looking. It is the same things over and over again. Shops, buildings, roads… Nothing nice. Of course, there are some exceptions.

There are some parks, and some city centers are quite nice. And some special buildings can be quite beautiful, especially in a historic city. But the overall average city is not great. Even if some city centers are great, most people do not live in the nicest part of cities. It is either too expensive or simply too full. Some most people live in the worst parts of the cities.

Villages are almost always more beautiful. There are many more houses in a village than in a city. Cities are full of big buildings full of apartments. I think that most people will agree that a small set of houses looks much nicer than a big ugly building. As ever with niceness, this is highly subjective, of course. I may be wrong on that one. But that is at least my point of view.

You may have some parks in your city, but overall, villages have much more of it than cities. There are some huge fields in the countryside. Some fields have animals, and some fields are growing vegetables. For instance, most of the space in my village is covered by fields.

Not only are there fields, but there are also forests and even sometimes rivers. For instance, just next to my house is a big field with cows and sheep. I can walk in less than five minutes to the next river. Also, there is a forest just a few minutes away as well. I can go hiking from my home to a small mountain. Finally, having a big lawn makes our place much greener. It is nicer and more peaceful.

Even though most of Switzerland is quite clean, the villages are cleaner. There are several reasons for this. First of all, there are fewer people. Fewer people directly translates into less trash. Also, in villages, people are not putting their garbage on the street for the garbage disposal.

There are places to dispose of garbage. Garbage in the street is something I have always disliked about the city. There is nothing less enjoyable than walking in a city where there are garbage bags on the sidewalks. This is so much better.

It is also less polluted. A reason for that is the smaller number of cars. Fewer cars mean less pollution. You can feel the difference in air quality between big cities and the countryside villages, especially if your village is higher in altitude than the city.

I have always found that people are nicer to each other in small villages. You always know your neighbors, and you help each other. People meet at small village parties. Every time there is an event, there are many people, you know.

You get to know the people who work in the shops and the organizations. The people I know that are living in the city all said that this was not the case in cities. Sometimes, there are some exceptions in small parts of the cities where it is different.

In cities, there are too many people to know each other. Most people do not even know their same-floor neighbors. This is not something I want. I like having only a few neighbors and knowing them. I regularly talk to my neighbors, and we had several parties with them. If I need something, I can ask them. Having helpful neighbors feels great.

There are many fewer crimes in villages than in big cities. We are very lucky in Switzerland with a generally low crime rate. But it is even better in the countryside. That is not to say there is no risk. I do not know of any place in the world when there is zero chance of crime.

But nobody will argue that fewer crimes, attacks, and burglaries are bad things. I never heard any of my acquaintances have any problem with crime in the countryside. I know many people who are confident enough to let their doors open at home. Many bicycles are left unattended. And nothing happens. Isn’t this awesome?

9. It is better for children

They will have much more room to play for them. I remember playing in many places when I was growing in our village. We went playing in the fields, in the forest and even in the rivers. And they will probably do something better than just stay in front of a TV or computer. I am not the best example of that since I spent a lot of time playing video games. But there were a lot of opportunities to play outside. Living in a village is much more healthy. We very often went walking with my family.

For me, there are many advantages to living in a village and not in a city. The quality of life is better, in my opinion. It is more beautiful, more peaceful, safer, greener, and cleaner. Great, right? Of course, there are some disadvantages. For instance, there are only a few shops, and you often have to take the car if you need something. But that is a small price to pay to have such a high quality of life.

For now, I do not see myself moving out of our village. I see myself moving into a house in the coming years, though. However, I know that Mrs. The Poor Swiss does not like isolation as much as I do. So I may have to compromise on this and maybe move halfway from our village to the city. But, this is the future’s talk.

Since we are living in a small village, we need a car to get around.

Watch this video about one village from Switzerland, Gimmelwald, to be convinced about the beautiful small villages of this country:

What about you? Do you prefer to live in a city or a village? And why?