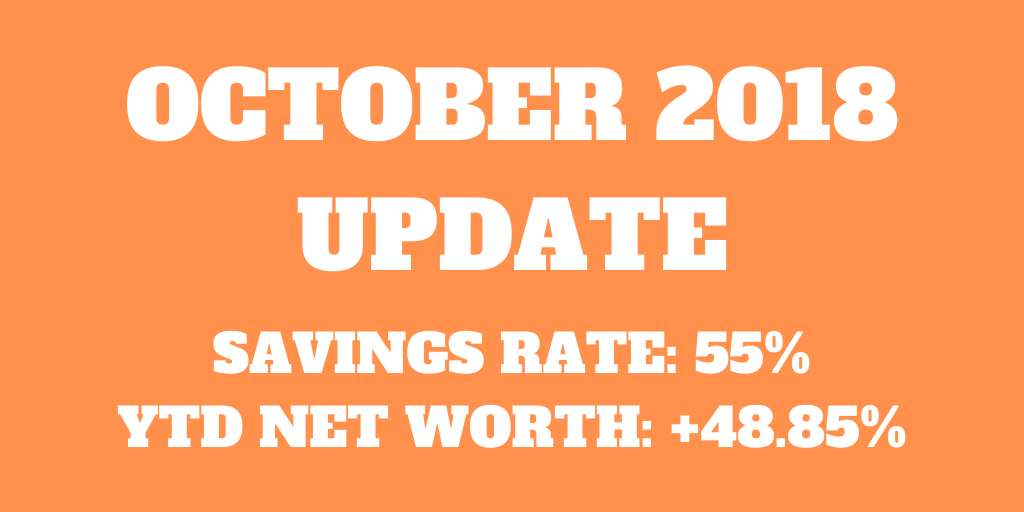 October 2018 was a really nice and quiet month. It was not very eventful but we had several family events. And overall, we had a lot of fun and we did not spend a lot of money. Isn’t that the definition of a great month?

While the month was very quiet for us, the stock market was far from being quiet. We arrived into correction territory for most of the major indexes. And our investment portfolio is down a lot this month. Since our portfolio is not yet huge, our net worth is still up since what we invested is more than what we spent. But this will not last. In the next correction, we will probably be down a lot more.

END_OF_DOCUMENT_TOKEN_TO_BE_REPLACED 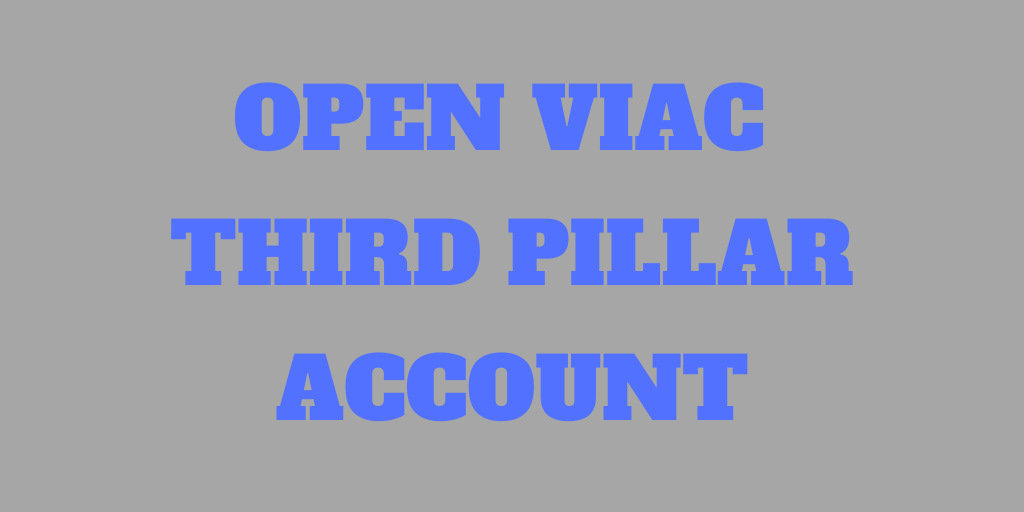 Before, my only problem with VIAC was that they are mobile-only. But I need to go over this small problem and be smarter about it! And since PostFinance increased their fees, I decided to walk away from them earlier than I planned.

END_OF_DOCUMENT_TOKEN_TO_BE_REPLACED 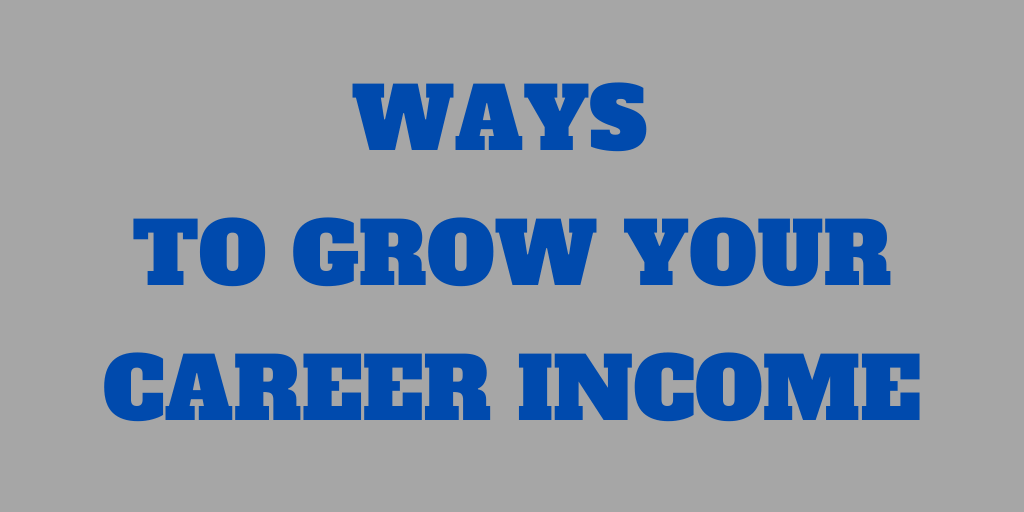 We already discussed whether you should spend less or grow your income. The answer was that ideally, you should do both to reach Financial Independence (FI) faster.

The best way to grow your income is to increase your career income. For this, you should work to improve your human capital.

There are several ways to grow your primary income. Some of them are easier than others. And some of them are best applied to some fields but may not work in some areas. Unfortunately, there are no simple get-rich-quick ways to increase your income. It will take time and commitment. But if you are committed to increasing your income, you will get a better salary.

END_OF_DOCUMENT_TOKEN_TO_BE_REPLACED 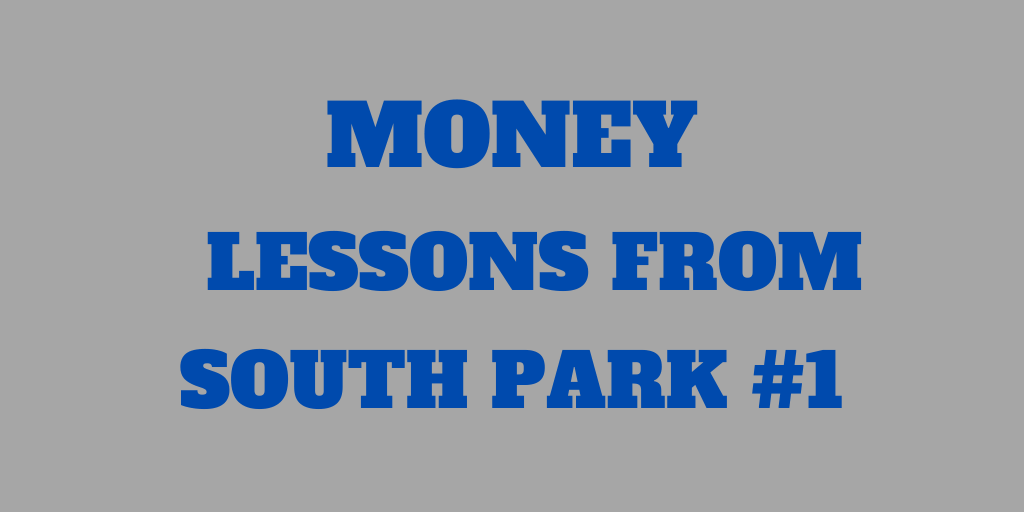 I watched several of them in their entirety. I cannot count the times I laughed uncontrollably at some of their episodes. Yes, they are incredibly dumb. It is the point. But that is what makes them incredibly funny! I like dumb things!

I have watched the entire collection of South Park, Family Guy, The Simpsons, American Dad, and Rick And Morty. And I have watched many episodes many times. I even know some of them almost by heart.

So let’s see if we can learn something from these dumb episodes. The lessons learned can be about investing, personal finance or anything money-related.

This post will be about South Park. For this, I chose five episodes who can teach us something about money. Later, I am going to try to make several of these posts. I already have several ideas for the next episodes.

The pictures in this post are the property of Comedy Central.

END_OF_DOCUMENT_TOKEN_TO_BE_REPLACED 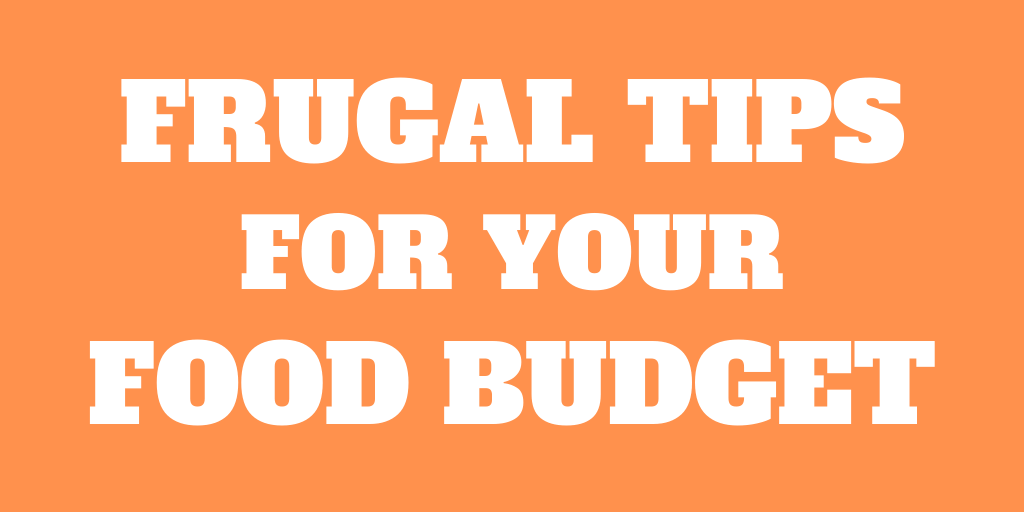 Our food budget is something that we have optimized very well. We keep our food budget, for two people, below 400 CHF per month, on average.

For Switzerland, it is a very good food budget. And several months we are quite lower than this. It is the months we are inviting many people to our place that are increasing the average.

To reach this low food budget, we are doing several things. And by following these simple tips, you can also keep your food budget low!

END_OF_DOCUMENT_TOKEN_TO_BE_REPLACED 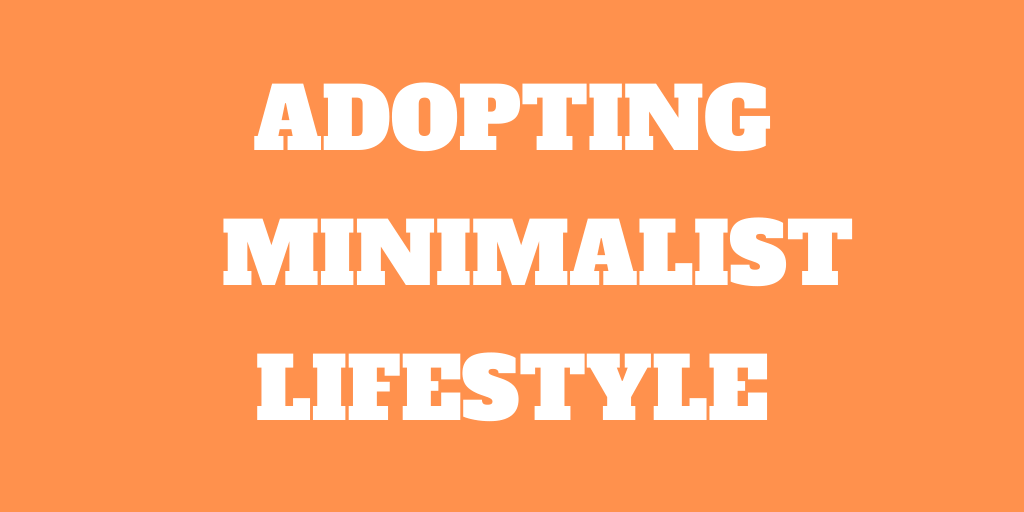 I was thinking of buying a small book on minimalism recently. But actually, I bought a pack of several books about minimalism. To be honest, I was thinking I was buying a single book but ended up with a pack. Oh well. The first book  I have read is Adopting the Minimalist Lifestyle by Ariel Horowitz.

It is a really tiny book. I thought the entire set of books was small already, but each book is tiny. It is a minimalist book about minimalism! I have been able to find it for very cheap on Kindle once again. It is difficult to find this kind of book in my used book shop. But if you are patient, it is relatively easy to find them for cheap on Amazon.

END_OF_DOCUMENT_TOKEN_TO_BE_REPLACED 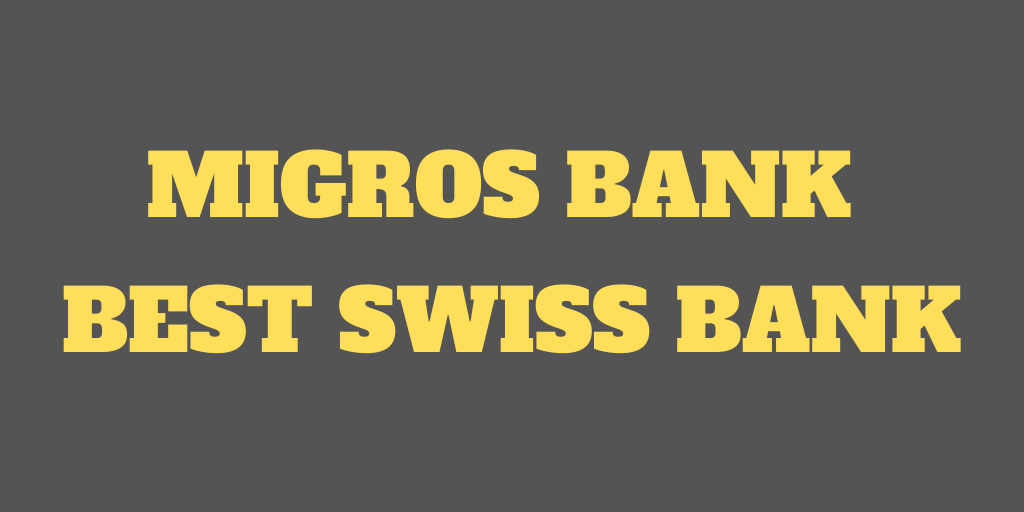 For several years, I have been using Migros Bank as my main bank account. They are offering good service at excellent prices. And in the days of expensive bank accounts in Switzerland, it is important to look at these fees.

In this article, I want to review the bank account offering of Migros Bank in detail. We will see all their prices and how it compares against other Swiss banks.

END_OF_DOCUMENT_TOKEN_TO_BE_REPLACED 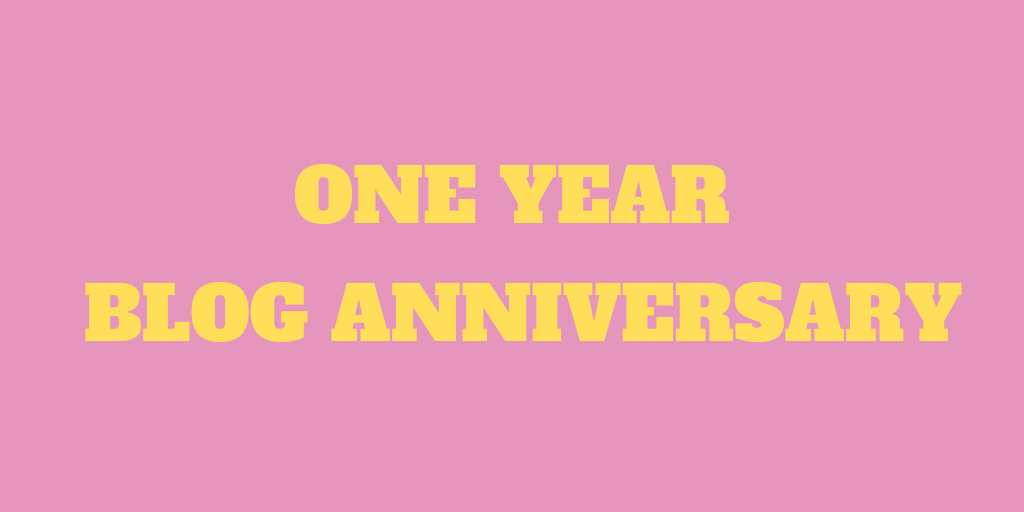 I cannot believe it has already been one year since I started blogging. On October 10th 2017, I wrote the first blog post of The Poor Swiss. I have learned a lot of about personal finance in that year. And I have also learned a lot about blogging. Even though this was not my first blog, I still had a lot to learn. And I still have a lot more to learn now!

Recently, I have talked about the reasons why I am blogging. Now, I am going to share numbers about how the blog is doing. I am also going to share the things I did right and the things that did not go well. However, I still have a lot of work to do to improve this blog. I am hoping that it gets better over time.

END_OF_DOCUMENT_TOKEN_TO_BE_REPLACED

This book tells the story of Nicolas Darvas, who made two million dollars in the stock market in less than two years. Nicolas Darvas is not a professional investor, but a dancer. He is touring around the world, going from one show to another. The book tells his story from his beginnings with many mistakes to the successful. I thought it was a very interesting story. You can learn many things from his mistakes and his successes. Even though the book is quite old, I think it is still mostly relevant to today. You

END_OF_DOCUMENT_TOKEN_TO_BE_REPLACED 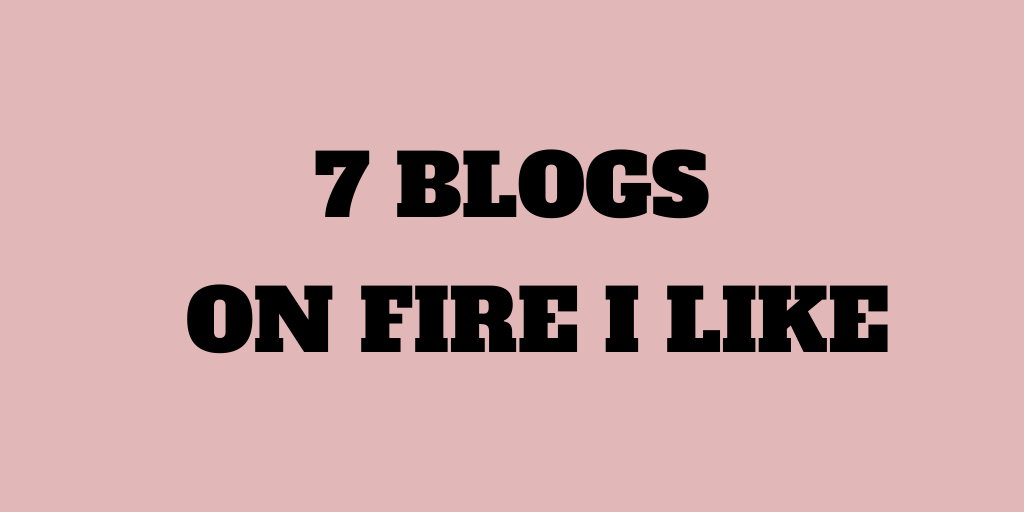 This post is not about my blog but other blogs! As I mentioned several times in the past, I am reading many other personal finance blogs. Some blogs are purely about investing, and some blogs are entirely about Early Retirement. However, all of them contain some valuable lessons if you are on the road to Financial Independence (FI). Some of them helped make the Financial Independence and Retire Early (FIRE) movement as popular as it now. I think it is also important to share with the community and not only focus on a single blog.

There are several reasons why I read other blogs. The first reason is to learn from others. Indeed, I am far from being an expert in FIRE. I like reading what people are doing to achieve FIRE and especially what people who already achieved FIRE can teach me. Also, I love reading in general, and some of these blogs have really enjoyable content. Another reason is to get some inspiration for my blog. I am not talking about copying their blog posts. But I am talking about making my blog by learning from others.

The seven following FIRE blogs are in no order. I do not have a favorite in these seven blogs. They all are my favorite blogs. I also read many other blogs. But the entire list would be too long to publish here. I strongly encourage you to take a look at them if you are not already reading them!